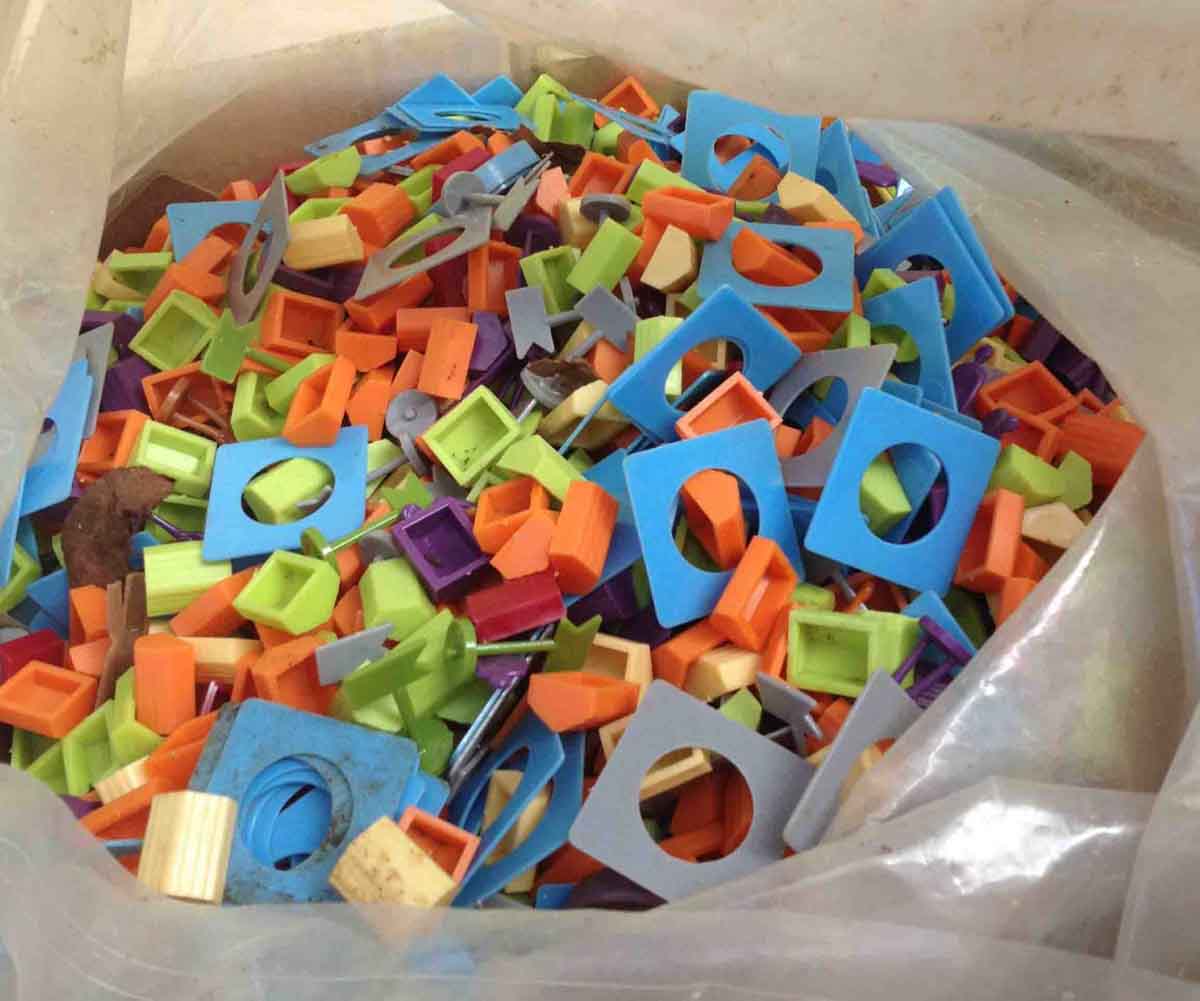 Since starting the many tasks of my downsizing project, I have been struck again and again, by just how difficult it is for me to throw any thing away that might still have some value, some use to someone else – if it was still “good”.  And after a bit of pondering, I have a theory.  So what follows is the “why” I hinted at in a previous post on repurposing the frames of old, unsold art. 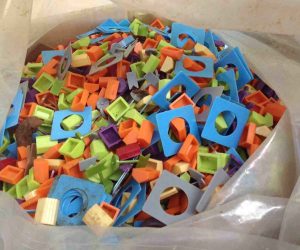 Here is an example of something I was loathe to bin – useless stuff but not actually broken. They are plastic board game pieces.  My inspiration for what might be done with them went years ago, but hey, this stuff was still good, even if I no longer wanted it. Someone might use them for an assemblage or something.  (For goodness sake!) 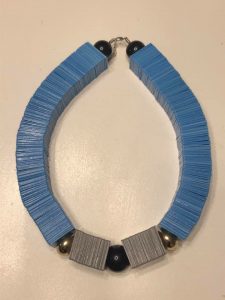 So my issue was not “Take courage, Jacky, just bin this plastic stuff”, but “Who could I give it to?”  And then I thought of mixed media artist Denise Lamby who repurposes all sorts of materials. (See more of Denise’s work here, and on her Facebook page.)  At the time of writing, Denise had made this wonderful necklace, and I am eager to see what else she may come up with.  (Image credit: Denise Lamby.)

Where things really are still truly useful, like fabric and embroidery thread, I don’t actually have a problem. My preference is to sell that sort of stuff (I always need art money), or to give it some one who would like it, or to donate it to the Op Shop. It’s not being wasted.  The resistance is with chucking out stuff that isn’t broken, is still “good”, and just might be useful to some one (if I only knew who).

So what is going on with you, Jacky

My simple theory is based on the idea that what was emotionally important in one’s early childhood is deeply influential and becomes a vital part of your world view.  I was born in the Netherlands during the German occupation.  Life was difficult, and there were shortages of food and other things.  Being frugal and finding a use for everything was a necessity.

My parents spent a few years in Indonesia, before ending up in Western Australia in 1951, when I was about six years old, going seven.  It was difficult then as well, for my parents to start afresh with (then) three young children. Things continued not to be wasted, and one made do with what ever was to hand. This was normal during my formative years.

It was only quite recently that I realised this “saving anything that is still good” bug was much stronger in me than in my mother. She actually had had a relatively privileged childhood as a daughter of two doctors in early 1900s Holland.  What was just a necessity for her had become a part of my world view through early imprinting.

And now, from necessity, I am becoming much more discerning.  As I keep sorting through stuff in preparation for selling the farm, anything I can’t find a home for or that doesn’t sell, is going to the Op Shop, or into the bin.