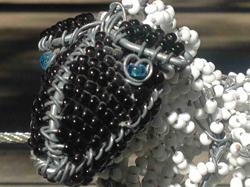 Such a charming contradiction … is some writing I did not long after my mother had died at 101 years.  I decided to share this updated personal piece as my first blog post, because it lets me introduce myself in a more personal way than what an “About” page, or a “Bio” can do.

So this is the story of Blue Eyes – the charming contradiction – a woolly sheep made with wire and beads.  And with blue eyes. Can sheep have blue eyes? I didn’t know, so I searched. And yes they can. Harlequin sheep and Baby Doll sheep do.  And oh, what a search to find just one image of a sheep with blue eyes.  But I digress. 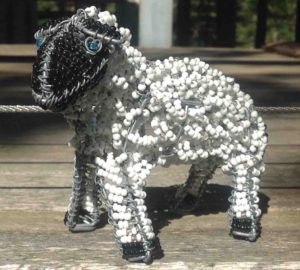 I remember being captivated by a hard, rigid representation of a soft, rounded animal, but I can’t recall where it was or when it was.  All I remember is that I loved this beaded sheep, that I bought her to give to my mother, and then promptly forgot about her.

The blue-eyed sheep returned to my awareness in 2016.  My then 100-year-old mother was to move from her retirement village unit into full care, and with all my siblings away, it was my privilege to manage the shift.  Three rooms into one won’t go, leaving most of Mum’s things to be sorted for distribution or discarding. Blue Eyes amongst them. 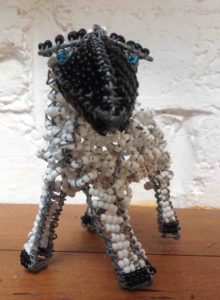 Once Mum had settled, the cleanout of her unit could begin.  I sorted Mum’s possessions into categories – kitchen stuff, clothes, bedding, books, ornaments, her art, wall hangings etc. – so that on their return, my siblings and I could choose what we wanted for ourselves or our children and grandchildren.

Blue Eyes.  I wanted her. Fortunately no one else did – they thought her strange. And so she is, yet compelling in her awkwardness and contradictions.

So I took Blue Eyes home, put her into my studio, and forgot about her again. 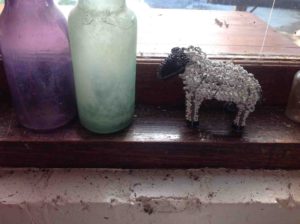 Helping to write the eulogy for Mum’s funeral was useful as it forced me to recognise the very considerable positives that I had received. Her courage, resourcefulness, creativity, and more. In personality we were actually quite similar.  Perhaps that was why we clashed when I was young. l was so keen to marry and truly leave.  Later, when I no longer wanted to be left, I would find it quite hard to unleave. 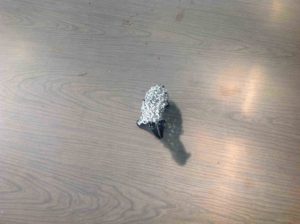 A formidable Dutch matriarch and a force of nature, she was in time reduced to a slight, dependent, yet still strongly opinionated figure.  You always knew what she thought.  She told you. That contrasts with a poignant memory of a very old, shrunken woman, curled up in bed, welcoming a goodnight kiss plus hand stroking, which would not have happened even 5 years previously.

Of course we mature. I came to understand that the negatives in my growing up were not intentional.  Physically all us kids were really well cared for, and I doubt she understood, possibly might never have understood, the impact that she did, and could have.

So over the years I worked intermittently on my issues, and came to totally forgive.  When I discovered art I thought I might explore my mother that way, but it never got very far.  I still tended to focus on negatives, and didn’t want to cause hurt or offence. I let it slide.  I would work on those things when she was gone.

Well, now she is gone, and with my attitudes more mellowed, more gracious, more understanding, I wish I’d taken the time to ask Mum questions about those early years, instead of backing way. 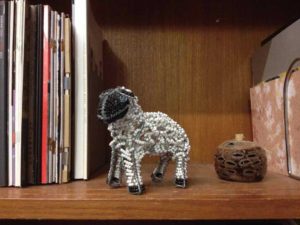 I regret the opportunities lost.

And so, having been brought to the fore again to a new position above my desk in the studio, Blue Eyes now looks down at me when I write, a benign and meaningful presence.

2 thoughts on “Such a charming contradiction …”