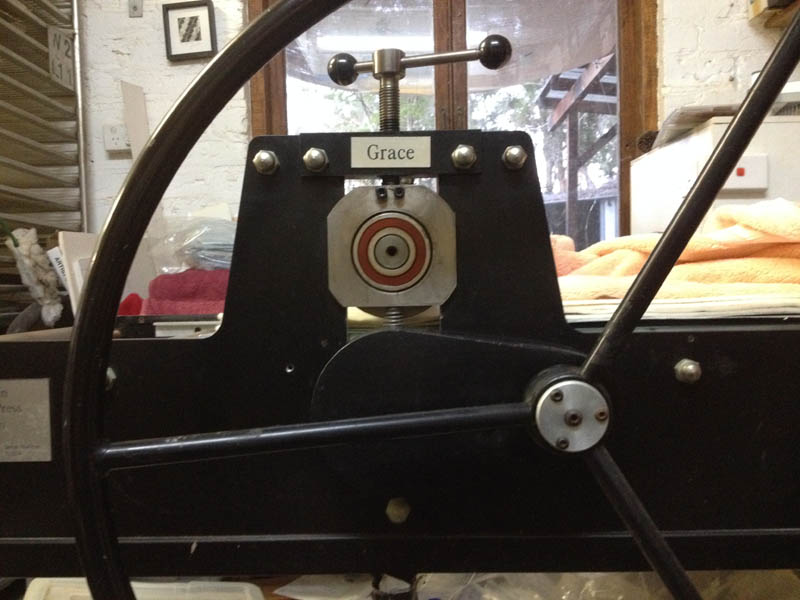 One of the disconcerting things about graduating from art school is that you lose access to specialised tools. I had discovered the joys of printmaking as a student, but now, suddenly, it became a lot harder to do.  I was living in Brisbane, Australia at the time, and so I joined the Brisbane Institute of Art (BIA), taking printmaking classes and sometimes hiring their press, but it wasn’t the same.  I couldn’t work on a plate in my studio at home and proof it to see how I was going, and then print an edition.  Packing up all my stuff, my inks and paper to take to the BIA was such a burden, that after a while printmaking just dropped away. 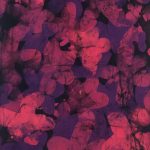 Instead I began to focus on my other love – textiles, especially the making of batik.  I was producing my own stamps, or caps (pronounced “chaps” to rhyme with “ups” by the Indonesians) and using these to put down wax shapes.  This is essentially printing (stamping) with wax, so there was a similarity with what I had been doing.

Image Left: Scan of part of a handmade batik scarf, made with handmade frangipani flower stamps.

But I continued to long for, to lust after, a press of my own.  I was working big at the time, so believed I would need a big press.  And I couldn’t see a way of justifying such a large expenditure to the family.  Then one day I realised that while I did need a big press to print an edition with a large plate, I didn’t actually need a large press to just proof such a plate.  A small bench-top press has a bed that is plenty big enough to get an impression off even a very large printing plate.  Once I was satisfied, I figured, I would be able to hire a press to print an edition. I decided that I could impose the cost of a small bench-top press on the family.  But before I could action this plan, some marvelous events occurred around the same time, and I ended up with the printing press of my dreams. This would have been around 2003 – I forget the exact timing.

First my mother gave me some money. She never forgot that at a time of great need a request for assistance had been refused by her mother, even though it could easily have been afforded. My parents were desperately short of funds, having moved to a new land with small children.  Mum could wait until she inherited it.  In the light of that experience, my mother decided she would give any spare money she had to her children while she was still living, and while they could make good use of the funds.  Out of the blue, my mother gave each of her four children a useful sum.  I didn’t link this money to a printing press then, though.  I thought perhaps I might buy a good camera.

And then came something really miraculous, for at around the same time, my siblings and I came into a totally surprising little inheritance from Holland.  An old man had passes away without a will.  He had no siblings, had never married and had no children, so his estate was divided in halves to be distributes between the offspring of his parents.  We came in on the father’s side, and it was our father who was the descendant.  And because our father had also died, the four of us received a quarter each of his share. 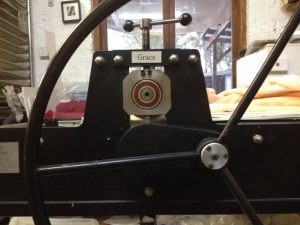 Add the amount I was willing to spend on a bench press to the promise of two lots of unexpected money, and suddenly the prospect of actually getting a big press became a viable option. I researched the characteristics and costs of various etching presses, eventually settling on a Mitomel press, manufactured in South Australia.  One of its features is an individually etched plate with a name for the press.  I felt very blessed by God to suddenly have the money for the etching press of my dreams.  It was an act of grace, and I called my press Grace.

Choosing a name for my press was the easy bit.  Installing Grace in my studio was more challenging.  Here you see Grace packed up in her travel crate in the trailer, after we had collected her from the transport depot in Brisbane.  The unpack has started. Her stand had been strapped to the top of the crate during transport, and this has already been removed.  The idea was that we would lift Grace in her crate with the old excavator, and trundle her to my studio window, to be lifted inside through the window and placed on her stand.

What follows is a series of images showing Grace progressively getting closer to being installed onto her stand in my studio.  First we see Grace in her crate outside the studio window, ready for the lift in, followed by an image of me guiding the crate through the window. Notice that the right window frames has been removed, to let Grace’s crate fit through. 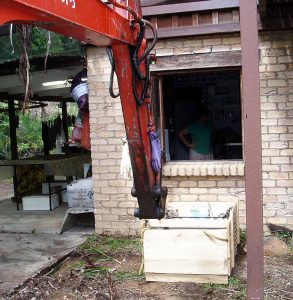 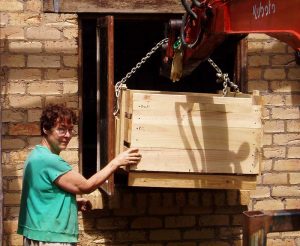 Next you see the crate in the studio, as viewed from the outside, and the inside. There was very little space for the excavator boom, as both images illustrate.  We only just managed. 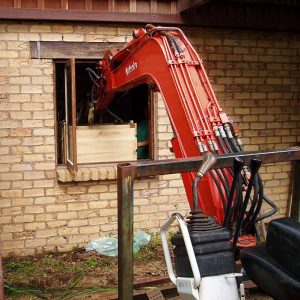 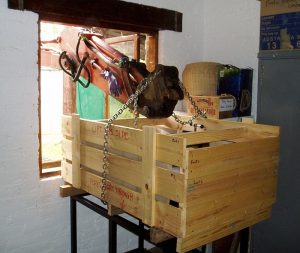 David Lowry, my husband, was the hero of the operation, thinking it through and operating the excavator.  Below you see him through the studio window, manoeuvring the excavator very slowly and very carefully because it was very old, and quite sloppy in its handling. Remarkably, fifteen years after the events described here, this excavator is still going, and needs even more careful and thoughtful handing.  The next image shows Grace on her stand, with most of her crate demolished. 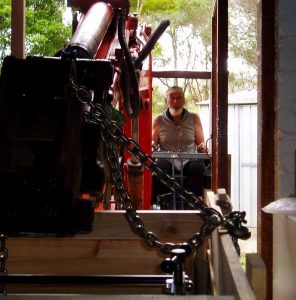 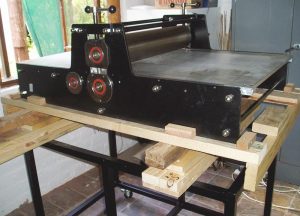 David and I got the crate out from under the press by jacking it up and shifting out bits of timber one at a time, carefully removing the base of the crate until the press was fully settled on her stand.  You see the penultimate stage below, with just two bits of timber left.  And finally, the press is ready for use. 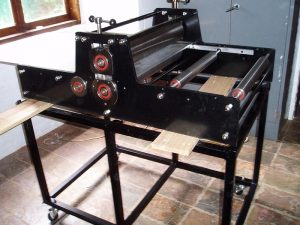 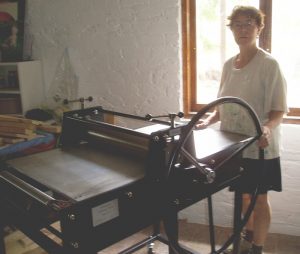 Emmanuel Diakomichalis, who had built the press, had recommended we find four burly blokes to carry the heavy press and lift it onto the stand, but David though we could manage alone.  With a bit of thought, and the judicious use of levers, an old man and an old woman, and an old excavator, managed very well.

2 thoughts on “The Story of Grace, my printing press”